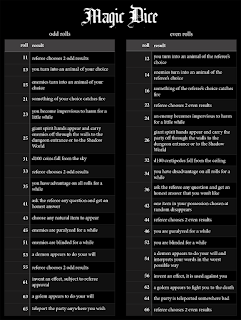 Here is a pdf version.
It is most fun when the players don't know that odd results are good for them and even results are bad. Mine don't even know that it is a d66 roll and not a total. When they roll an even result and there is a referee choice, I often ask the player to choose something that might be good for their character, then turn their choice against them. For example, on a 14 I might ask the player to choose an animal they want to turn into, then have their enemies turn into that animal instead.
on September 17, 2020 No comments:
Email ThisBlogThis!Share to TwitterShare to FacebookShare to Pinterest

Setting Notes: What Is Magic?

Working on the explanation of the nature of magic in my game world:

There is no magic. What may seem like magic is merely the skillful application of certain hard-to-apprehend deep truths about the nature of reality.

The world as you experience it appears to be something firm “out there.” This appearance is reinforced by the fact that people are largely able to agree on what seems to be “out there” – any five people can look at a horse and agree that it is a horse, that it is brown, etc. The few people who see things that others don’t can easily be dismissed as crazy and everyone can happily go about their lives as if they have a solid and unproblematic apprehension of their immediate surroundings.

It is therefore easy to remain ignorant of the fact that the world as we experience it is only a convenient presentation created by our brains – light, sound, and matter impinge on our bodies, and the raw sensations thus created are processed in our brains and organized into a coherent tapestry of perception. This presentation is generally 100% successful in allowing us to navigate our surroundings and to communicate about them. So it is easy to ignore the fact that we actually have no direct knowledge of external reality – we only have the interpretations our brains make based on the limited and discrete inputs of our sensory apparatus.

Those who are able to really apprehend the plasticity of “reality” as presented by the brain may be able to shape that reality in ways that seem magical to the uninitiated. Through rigorous training, they may be able to open new avenues of perception to see things that are normally invisible. They may learn to access the unconscious processes and schema used to organize ordinary perception, both in their own minds and in the minds of others, and manipulate those processes to astounding effect. Just as the baby is amazed when the ball “magically” reappears after it had vanished from existence when their parent hid it behind their back, so ordinary people are amazed when the initiate performs seemingly miraculous feats by applying their arcane knowledge of the hidden nature of reality.

on September 14, 2020 No comments:
Email ThisBlogThis!Share to TwitterShare to FacebookShare to Pinterest

In opposed-roll systems in which the magnitude of the difference between opposing rolls is not considered, the only possible outcomes are player wins, referee wins, or tie. The type and number of dice are of little consequence in such systems as the player and the referee will always each have an equal chance of winning. The only difference is the likelihood of a tie: 5% for opposed 1d20 rolls versus 11.27% for opposed 2d6 rolls.

Clearly with opposed 1d20 rolls one has more options for defining close and extreme results, allowing more flexibility to tailor the game to suit the table.

Rolls Against a Target Number

For target-number systems, 1d20 once again provides greater granularity for setting different target numbers. It also makes it quite easy to know the probablity of hitting a target number without having a table–it simply varies by 5% at each step. With 2d6, the steps are not equal as the target number increases, making judging the odds of hitting the number non-intuitive. And once again 1d20 provides more extreme results in games where the maximum and minimum rolls have special meaning: the chance of rolling a 1 or a 20 on 1d20 is 5%; the chance of rolling a 2 or 12 on 2d6 is 2.78%.

Using 1d20, one can easily adjust the probabilities of success, mixed success, and failure in 5% increments to suit their table or the specific situation at hand. With 2d6, the options are more limited and small adjustments to the ranges make bigger changes to the probabilities.

At this point one might ask, is there anything 2d6 can do that 1d20 can’t do? When we look at the probabilities of various results, the bell curve of 2d6 results doesn’t actually make much of a difference; 1d20 can be made to approximate the same probabilities by adjusting target numbers or result ranges. The only things you can do with 2d6 that you can't do with 1d20 are make the odds of rolling the maximum or minimum less than 5%, and make it difficult to guess the odds of a particular result without a table.

In conclusion, the type of dice you use is far less important than an awareness of the probabilities of various results and of your ability to adjust those probabilities to achieve the kind of game you want.

Big thanks to anydice.com for helping with the math!

"Playing With Fire," a simple system for gunfights in freeform and rules-light games